A large crystal chandelier can fully illuminate the room. That is why when choosing the type of room lighting, the option with a large ceiling chandelier is most often chosen. Crystal chandeliers have a large number of separate elements and, accordingly, small surfaces, which significantly increase the lighting area. Reflecting from each scrap, the light breaks up like a rainbow, raising the mood of everyone present.
The ceiling chandelier of the 4274 series has the shape of a circle. Decorated in silver tones, it looks like a huge hot circle, as if the light itself hangs over the room, trying to reach the farthest corners with its rays. The chandelier consists of a large number of triangular shaped crystal sticks. Each stick has 3 long, elegant faces that spread the light into separate thin reflections. The sticks are arranged in several rows, creating a whole brush of light rays for illumination. Being at different heights adds a certain element of chaos and mobility. The outer layer of sticks is decorated in metal boxes, each stick in its own. It was as if under the ceiling there was a collection of sticks of light that could disconnect at one moment and shine independently.

There are no reviews yet. 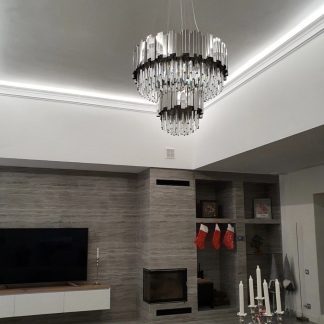